According to the latest estimates from the World Health Organization (WHO), more than 300 million people worldwide live with depression. These estimates make depression the leading cause of ill health and disability at a global scale. The number of people with depression increased by more than 18% between 2005 and 2015.

Below world statistics on depression, as reported by the WHO. 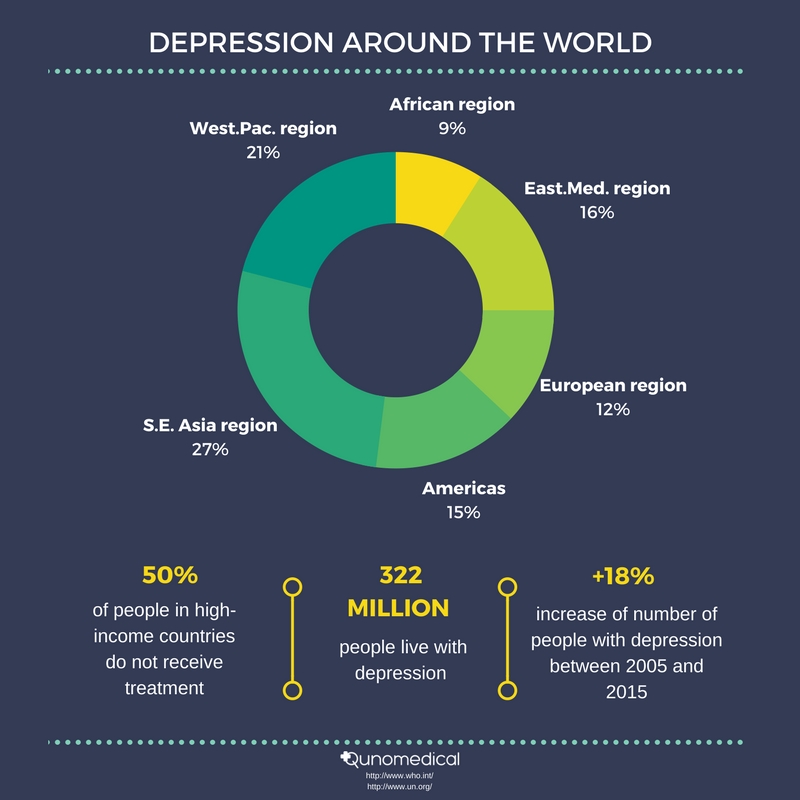 Depression around the world according to regions, as specified in the infographic:

Nearly 50% of these people live in the South-East Asia region and Western Pacific region, reflecting the relatively larger populations of those two regions (which include India and China, for example).

In order to raise awareness, the 2017 World Health Day (April 7th) will focus on depression. To this aim, the WHO has organized a year-long campaign, Depression: let’s talk.

How is depression affecting the elderly?

Depressive disorders involve sadness, loss of interest or pleasure, feelings of tiredness, disturbed sleep or appetite, feelings of guilt or low self- worth, and poor concentration. Depression impairs the ability of an individual to function at work or school and cope with daily life.

In terms of age groups, prevalence peaks in older adulthood (above 7.5% among females aged 55-74 years, and above 5.5% among males).

This strikingly number has encouraged us to focus on depression in the elderly, as it is often overlooked and untreated.
There are various factors that can lead to depression as a consequence of life changes that come with ageing.

"One thing that is vital to understand when dealing with depression in older adults is that they are often having to deal with loss", says Louise Morse, cognitive behavioural therapist at Pilgrims' Friend Society. "Loss of physical and mental agility, perhaps, but always loss of family members, both older ones (who passed away) and younger ones (who moved away for work). The combination of losses can be overwhelming. They lose people who help reflect back to them their identity: people they can bounce things off and trust, people with whom they have shared memories".

There are signs, behaviours, and actions that should not be taken for granted or belittled as normal aspects of aging. Signs to look out for include:

Depression is treatable, with talking therapies or antidepressant medication or a combination of these.

How can you help? 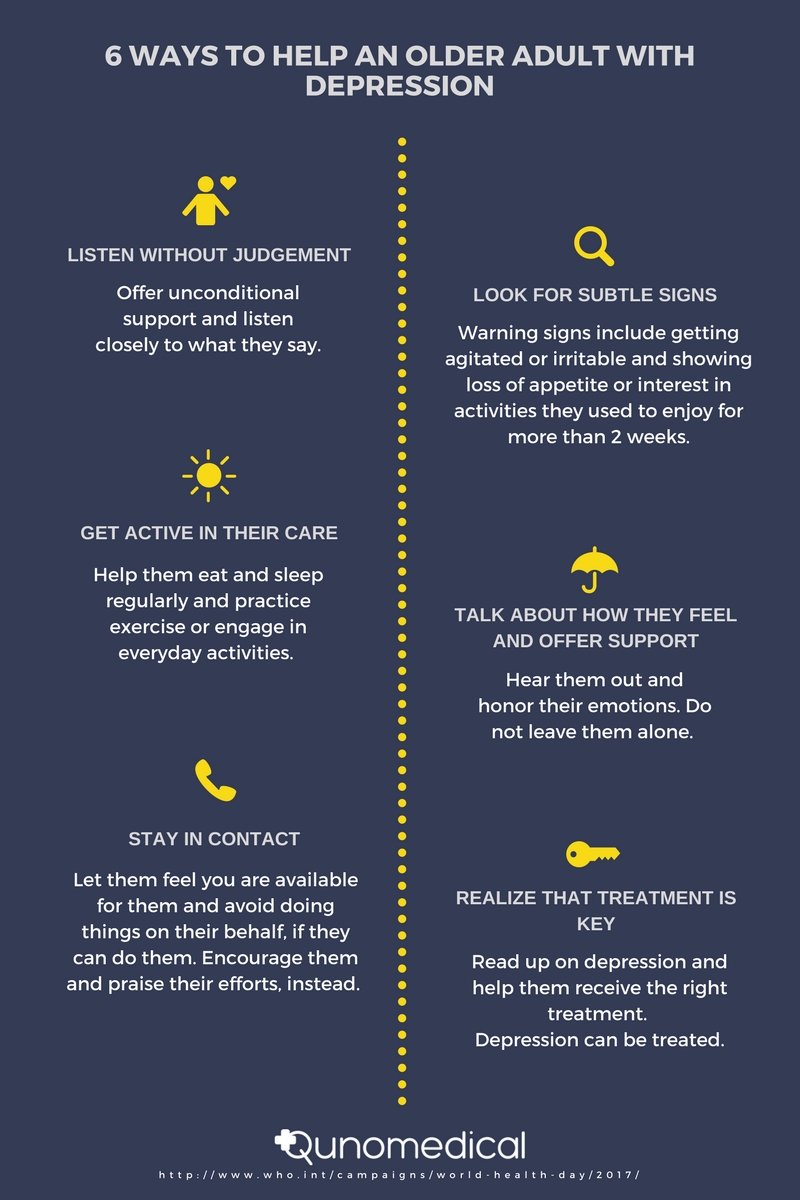 Offer unconditional support and listen closely to what the person says: little or subtle changes in their life can be warning signs.

Read up on and get a clear understanding of depression. Signs of distress may involve wringing hands excessively, getting agitated or irritable, or having difficulty sitting still. Older adults often do not say they feel sad or lonely because they don't want to be a burden on the family. Other possible signs include loss of appetite or interest in activities that they used to enjoy for more than two weeks.

3. Get active in their care

Go to appointments together and if any medication is prescribed, help your elderly relative to take them. Help them have a regular eating and sleeping pattern and encourage them to undertake everyday activities and practice exercise.

4. Talk about how they feel and offer support

It's really important to hear them out and honor their emotions. The elderly are often less likely to cope with loss or difficult life events. "One thing that could really help is to go over some of their memories and walk through their landscape. They can feel very isolated at times", says Louise Morse.

5. Realize that treatment is key

Depression can be treated. Family members should be aware of the disability that depression can cause and should offer their support in receiving the right treatment.

Let the person feel your are available for them. At the same time, don’t take care over their life and do things that they can do for themselves. It would only reinforce their perception that they are worthless and incapable. Instead, help them break tasks into steps and praise them for any efforts.

If you've appreciated what you've read about depression, feel free to share our infographics as you wish. Please credit the content's authors when republishing.

For more information about depression:

Find the right specialist at a fraction of the cost.

Ambra has the gift of putting complex matters into simple words. With her year-long background in the travel industry, she is our expert when it comes to travelling abroad for treatments.

More on this subject

Find out what are the most frequently performed plastic surgery procedures among men, how they work and how much they cost. read more...

Are you planning a medical treatment abroad? Qunomedical offers patient-centered care and high quality treatments at affordable prices. Get to know us! read more...

This is the story of Carl, a patient who thought he needed dentures at 42 before getting in touch with Qunomedical and finding out his teeth could be saved. read more...