Egg Freezing: How It Works And What To Expect

What is egg freezing?

Egg freezing (also known as social freezing) is a cryopreservation technique where a woman’s mature eggs are frozen and stored for later use. While shattering the biological clock wasn’t an option years ago, today women can feel more empowered to take charge of their family future. “The ideal age to get pregnant would be around 25”, says Inge Kormelink, Head of International Strategies and Policies at IVF Spain. “When this is not an option - either because it’s not the right time or they haven’t found the right partner - freezing eggs might be a great option to put off having a family.”

Egg freezing was initially developed to ‘safeguard’ fertility in those women who were undergoing medical treatment that would alter their ovarian health, such as chemotherapy or radiotherapy, but it is now increasingly used by women wishing to conceive later. As a woman’s fertility – including her ovarian reserve and egg quality – declines with age (and considerably so after 35), egg freezing offers one option to those wishing to have a family later in life.

How does egg freezing work?

Egg freezing has been around since the 1980s but older techniques yielded low success rates due to the delicate nature of egg cells. Recent developments allowed a new freezing technique, known as ‘oocyte vitrification’, to get a foothold and scale up the possibility of freezing, storing, and thawing viable eggs.

As displayed below, egg freezing is typically a 5-step process: 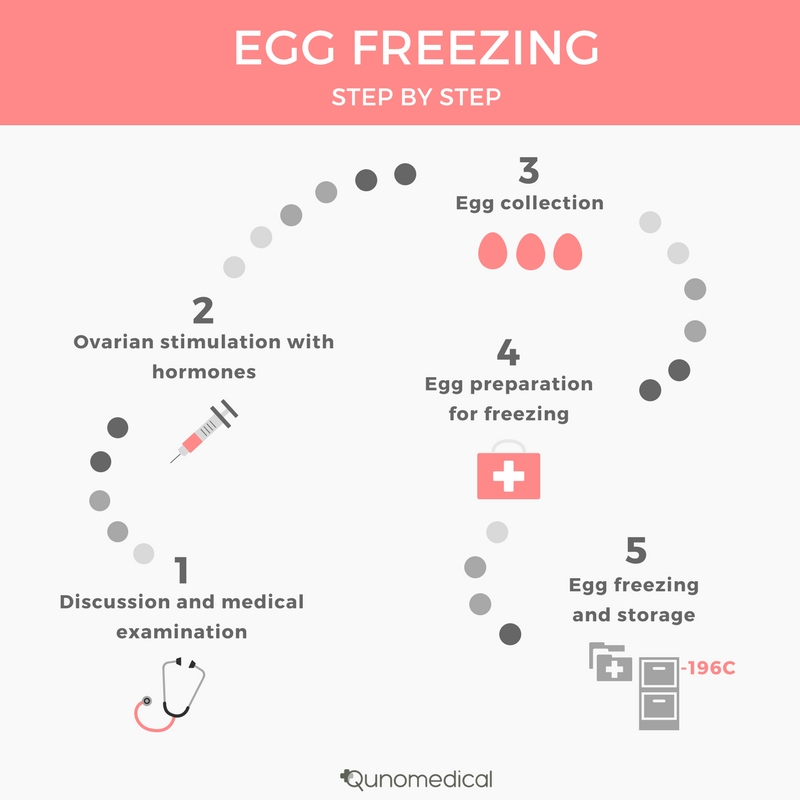 1. Discussion and medical examination The first step involves a detailed consultation and a preliminary medical examination that includes blood and hormonal tests. The goal is to understand the fertility potential of a woman including a full, in-depth evaluation of her reproductive system. Moreover, physicians understand if a woman meets all prerequisites to freeze her eggs.

2. Ovarian stimulation Once all tests confirm that prerequisites are met, the ovarian stimulation begins. Ovaries are stimulated with hormones to encourage the growth of an optimal number of eggs. The stimulation can last between 7 to 14 days and it can be done at home through injections. During this time, stimulation is monitored to estimate which is the best day for extraction.

3. Egg collection Egg retrieval is performed as an outpatient procedure under light anesthesia and lasts around 20 minutes. The procedure involves inserting a needle through the vaginal wall and into an ovarian follicle. Once inserted in the follicle, a suction device placed to the end of the needle will aspirate follicular fluid that will hopefully contain egg cells. The same procedure is performed on both ovaries. “At IVF Spain, our goal is to retrieve between 12 and 14 eggs on one session”, says Kormelink. The aspirated eggs will then be selected for freezing.

4. Egg preparation for freezing The mature eggs that were selected for freezing are washed and prepared for freezing. There are two types of freezing: the ‘slow freezing’ technique and the ‘vitrification’ technique. Most clinics prefer the latter as it’s the most technologically advanced and proved to be more successful: 90-95% of eggs frozen survived the freezing and thawing process, while slow-frozen eggs barely reached 61% survival rate. During ‘vitrification’, eggs are flash frozen to prevent eggs forming ice crystals that can cause damage.

5. Egg freezing and storage Eggs are frozen at -196°C and stored in a secure tank with liquid nitrogen that will halt the biological degradation of the eggs. Eggs can be safely stored for 10 years or more.

What happens when you want to use your frozen eggs?

When a woman who had her eggs frozen wishes to have a baby, her frozen eggs will be thawed to restore natural conditions. The fertilization process is the same one used for IVF (In Vitro Fertilization) and it involves fertilizing the egg cells with sperm in a laboratory using ICSI (Intracytoplasmic Sperm Injection). The resulting embryo(s) will be then transferred to the woman’s uterus after 2 to 5 days.

How much does egg freezing cost?

Costs for egg freezing vary depending on different factors, including location where it is performed, the technology used, other treatments combined and the annual maintenance that comes with it.

Considering the costs worldwide, egg freezing is particularly expensive in the USA, where the average cost for egg freezing is $9,000, in addition to $500-1000 per year for the storage. Prices in Spain are considerably lower: “At IVF Spain, the treatment costs €2550 up to 12 eggs and €3000 for 13 eggs or more. The storage for first year is free, while for every additional year the cost is €300.”

No wonder many international patients travel to Spain to get this and other procedures done (including IVF). “Around 96% of our patients come from a different country, “says Kormelink. “Most European patients travel from the UK and Ireland but we also welcome patients from Germany, Switzerland, the Netherlands, and Belgium. We have also treated patients from Australia and the USA.”

Women who want to postpone childbearing have an additional option, but there is a limit on how long eggs can be stored. “According to the Spanish law, the age limit for using frozen eggs is 50. If a person turns 51, she has to decide whether she wants to discharge her eggs, donate them for research, or to another woman.” mentions Kormelink.

What is the future of egg freezing?

“An increasing number of women has taken egg freezing into consideration in the last few years. It’s often a common perception to think that there won’t be any problems conceiving; the reality is that being young and healthy is not enough. After 40, chances of getting pregnant the natural way drop to 5%”, comments Kormelink. “I believe that we should raise more awareness around fertility worldwide and it is also up to institutions like ours - as experts in the field - to educate society on the importance of fertility. The time in which we create a family has shifted, so it is very important that women understand what is in their power to do, if they want to have children one day.”

For anyone looking for first-hand stories on egg freezing, Eggsperience collects personal experiences of women from all over the world, offering inspirational and educational material on the topic.

Find the right specialist at a fraction of the cost.

The information in this article is for educational purposes only and does not replace medical advice. Always consult your doctor before starting any treatments.

Sophie is a medical doctor by training, with a focus on cardiology and stem cell research. Her mission is to fundamentally transform how patients access and experience healthcare globally.

More on this subject

Find out what are the most frequently performed plastic surgery procedures among men, how they work and how much they cost. read more...

Are you planning a medical treatment abroad? Qunomedical offers patient-centered care and high quality treatments at affordable prices. Get to know us! read more...

This is the story of Carl, a patient who thought he needed dentures at 42 before getting in touch with Qunomedical and finding out his teeth could be saved. read more...